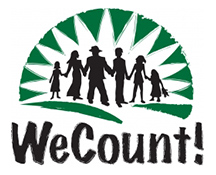 WeCount! was initiated as a program of a social service coalition, WeCare of South Dade, in 2002. In 2006, it became an independent organization with individual memberships.

During the WeCare years, community action teams worked on school and immigration issues. In 2003 and 2004, parent-community teams inspected local schools and won improvements in the physical state of five schools. In 2005, parents organized through WeCount! prevented the principal of West Homestead Elementary School from retaining the test results of one controversial reading test of around 500 students. That year, the immigration action team successfully convinced the Miami-Dade County Commission to pass a resolution supporting driver licenses for undocumented immigrants and organized a community forum with Congressman Mario Diaz-Balart at which he committed to providing leadership in the fight for legalization of undocumented workers and students.

Since 2006, WeCount! has worked to build the power of the immigrant community in the Homestead area through leadership development, community education, coalition building and campaigns for social change. In 2007, it began working with youth from immigrant families. Over the years, it developed a clear focus on defense of immigrant and worker rights.