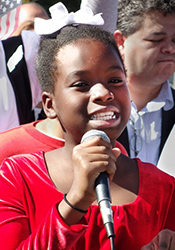 Ronyde Christina Ponthieux is a 10-year-old Miami Shores Elementary student and young leader in the Haitian Women of Miami and is now a TPS activist fighting for protection for vulnerable communities. She recorded her own video address to a President Donald Trump not to tear her family apart. She recently took to the stage during a Miami concert of Arcade Fire to advocate for the extension of temporary protected status for Haitian immigrants.

Marlene Bastien
Marleine Bastien, a Licensed Clinical Social Worker, is the Executive Director of FANM, responsible for oversight of the agency. She has championed the cause of women, children and Haitian families through her dedicated advocacy in the areas of immigration and human rights, HIV/AIDS, breast cancer and domestic violence. Ms. Bastien serves as not only the voice of Haitian women, but as the unofficial spokesperson for the Haitian community at large. She is often quoted in local, national and international media such as the Oprah Winfrey Show, CNN, the British Broadcasting Corporation (BBC) and others.