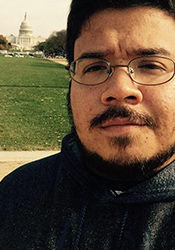 Juan Carlos Carabantes was born in the central state of Michoacan, Mexico on February of 1995. He came to the United States at just 4 years old through the southern border with his mom and four other siblings. Since then he has lived in Homestead, Florida a town known for its strong immigrant community. He is an undocumented immigrant who benefited from the DACA program that was announced in 2012.

Before that Juan Carlos felt tremendously lonely, without finding other undocumented youth especially those that identify as LGBT, but in 2013 he found he wasn’t alone. Since then Juan Carlos has been organizing to continue awareness about undocumented immigrants, especially those who benefited from the DACA program. For the following 3 years he supported undocumented leadership and organized the community. He participated in a few campaigns to make sure undocumented immigrants and their stories stayed a priority of the national debate; he trained communities on their constitutional rights, raised awareness on undocumented queer youth, disrupted Jeb Bush’s presidential candidate announcement, strategized against the 2016 Trump campaign, took over the New York streets when DACA was repealed on Sept. 5, and participated in a jail strike this December where he spent 6 days in jail on hunger strike to pressure congress to pass a clean DREAM act. Now he is an organizer with The Seed Project, a non-violent organization focused on obtaining dignity, respect, and permanent protection for undocumented youth and paving a path to protect all immigrants in the country. Coming from a family of farmworkers, Juan Carlos’s sacrifice has been rooted in honoring the sacrifice of his parents with the goal of winning permanent protection for his family and his Florida community.

Francesca Menes
Francesca is from Miami’s Little Haiti community. As part of Florida Immigrant Coalition, she has coordinated the Florida Wage Theft Task Force, coordinated a national network campaigning for Temporary Protected Status for Haitians, successfully led the statewide campaign “We Are Florida’s Future” to pass in-state tuition for undocumented students in 2014, developed and implemented a 2014 Voter Engagement Program in 2 counties and 5 cities knocking on over 45,000 doors. She is the Florida Immigrant Coalition representative to various national organizations, including the Black Immigration Network, she also is the co-coordinator of #Rights4ALLinDR.  Francesca has received numerous honors and recognitions, including being name one of the 20 under 40 Emerging Leaders in South Florida by the Miami Herald.